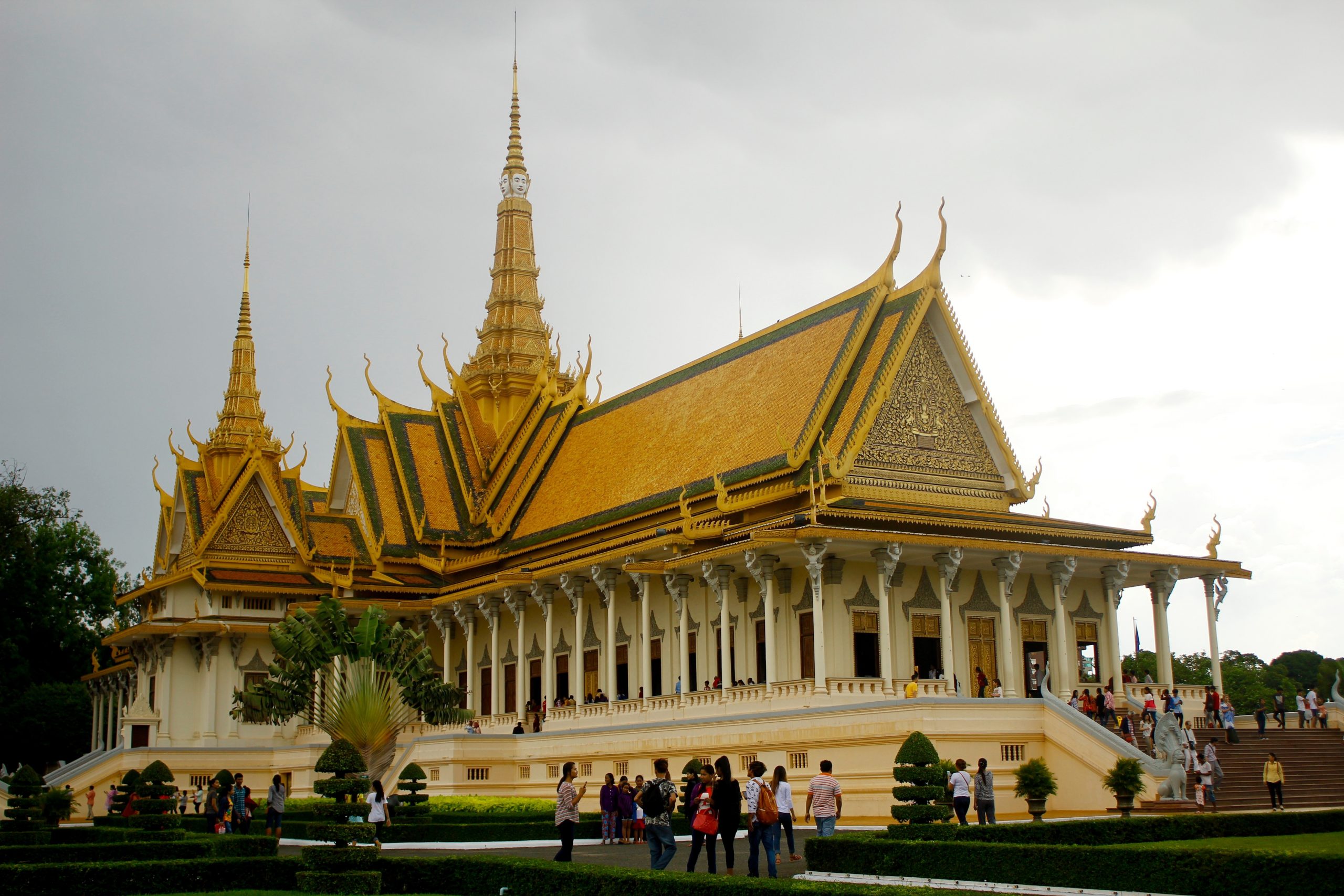 I was feeling a bit tired of the high heat and crazy humidity of SE Asia and feeling that I should skip whatever I had not yet seen and just move on to China. I am so glad that I stuck around a bit longer. Cambodia turned out to be not only beautiful but it also taught me a few valuable lessons.
After travelling through Myanmar for a month I took a flight back to Bangkok where I spent another night at the wonderful budget hotel Roof View Place. Bangkok is a great transport hub in the region, there are lots of options to get anywhere in Asia and prices are very reasonable. The food is also great and is worth coming back here even if just for one night. The following morning I had to leave the hotel at 5:00 am in order to get to the Chatuchak station in time to catch the 8:30 am bus to Siem Reap in Cambodia. I was running late so I hired a man on a motorcycle to take me to the station, little did I know that he would would drive like a maniac against traffic; which made for a very thrilling ride, and he got me there just in time to board my bus. The bus to Siem Reap was one of the best bus trips that I have experienced so far.  They gave us water and a snack-pack; which included juice, Nescafe latte, and a sweet cake. After a couple of hours of travel the bus assistant passed around a sign up sheet for all passangers to fill out with their passport number and personal info. They had decided (without prior consent) to act as our travel agent and collect money to process all of our visas at the Cambodian Embassy before reaching the border. For this service we had to pay the visa fee of $30 plus an agent fee of $5 and an immigration border fee (aka bribe) of another $5. I knew I could just walk to the immigration office after reaching the border and get a visa myself but the bus assistant and other travelers quickly discouraged me saying that there would be very long lines and that I would be holding up the bus. At the end I paid the $40 to avoid issues with the other passengers. After a couple of comfortable rest stops and eating our yummy boxed lunch of rice and salmon (also provided by the bus), I decided that the extra expense of $10 had been well justified by the awesome meals.  The sad part is that crossing the border still took a good two hours as people dispersed all over the place to go shopping for last minute duty free items and to visit the casinos found at the border.

IF YOU WANT TO KNOW ABOUT CROSSING THIS BORDER, READ ON… If not skip to the next paragraph:
This crossing area is a crazy chaotic commercial zone. When you first exit the bus you are surrounded by touts offering visa services just before the Thai emigration offices. I would suggest you avoid them and go through the Thailand building by telling them that you have a visa already. Once you exit the Thailand office (after getting your passport stamped), follow the signs to the actual border with Cambodia and walk until you see the white Immigration building just to the right of the beautiful Cambodian welcoming gate. It is huge and looks like it came out of the Angkor temples region so you will not miss it. Here you will most likely not find a line and you will only pay US$30 for a visa, if you are lucky to avoid the bribe of 200 baht. I write this after having done this border-crossing twice already. You will then have to go through the Cambodian immigration office to get stamped into the country. If you paid for a direct bus to Siem Reap (or Phnom Penh), they will wait outside of the casino area for all passengers. If not, then you can find offices of different transport companies to take you to the major cities/towns in Cambodia.
SIEM REAP:
Siem Reap turned out to be an amazing city, with comfy budget hotels, a great night-life scene including amazing street food and lots of shopping. And of course the amazing Angkor temples including the one place that this place is known for to most tourists… The magnificent Angkor Wat! I paid US$13 for a group tour of Angkor Wat at sunrise and other highlights of the surrounding temples and ruins. I highly recommend doing one of these or hiring your own tuk-tuk driver for the day for $15 to take you anywhere you want.
Angkor Wat is a complex of temples and the largest religious mounment in the world. It was built as a Hindu temple in honor of Vishnu (God of preservation) in the 12th century by the Khmer King Suryavarman.  It was later transformed into a Buddhist temple.
Another stop on the tour was the amazing Bayon temple, also built during the same time and by the same king.  There are column towers with very peaceful, and content faces of the Buddha.  Some believe these are actually faces of the King.

And the day just kept getting better… The next temple was Ta Phrom; which was a spectacular merger of nature and architecture.  The Cambodian jungle has taken possession of these ruins.  Parts of this temple were featured in the movie Lara Croft: Tomb Raider; which has made it a popular destination for tourists.
You can have a more intimate experience with this town by renting a bicycle and just riding around the temples.  It can get hot and humid but take your time and stop at the cafes and shops on the side of the road whenever needed.  You will discover many different, and beautiful structures all around the Angkor complex.
The sad reality of Cambodia’s recent past…
After Siem Reap I took a van to the capital of Cambodia, Phnom Penh.  I began my site-seeing with a review of Cambodia’s very sad past.  First I went to Choeung Ek; which is one of the sites that make part of the Killing Fields.  These are fields across the country where the Khmer Rouge executed and buried about one million people during the genocide of 1975-1979.  The Khmer Rouge and the killings were led by the leader Pol Pot and his government.  A terrible time in Cambodian history when the Khmer Rouge tried to implement a number of sick policies of social engineering.  The government wanted the population to be made up of a base of peasants to work the fields and produce as much rice as possible.  Everyone that did not fit the profile of this base person would be executed.  Close to 3 million people died in the country during this time from disease, starvation, over-work, or execution.
As horrible as it was, it is important to learn about it and pay our respects to the people of Cambodia who have turned these sad places where the torture and massacres ocurred into memorials.
I hired a tuk-tuk driver for the day to visit the two most known sites- Choeung Ek and Tuol Sleng.  Everyone walks in silence in theses places while listening to the audio guides or simply reflecting on the surroundings and learnings from the exhibits.  I listen to the story of a mother that still grieves her dead child more than 30 years later.   She remembers how she was forced to work in the rice fields all day making her unable to care for her eight month old baby when he was sick.  She explains she could not even produce enough milk to feed him because of her own malnourishment.  The baby died.  She was actually lucky to survive, other mothers would watch their babies die before they were tortured and killed themselves.  There is a stupa to remember and honor the dead.  About 6000 people were killed here.


The next stop was Tuol Sleng or the S21 prison.  This is one of 150 sites were people were imprisoned, tortured and killed.  Around 20,000 prisoners were held here.  You can enter the living quarters made up of tiny cells where the people were kept captive.  The torture devices used by the Khmer Rouge are also on display in different rooms.  Only 7 people survived this place and two of them were present at the prison the day I visited selling books and DVD’s where they tell their story.  I met one of them, Bou Meng.  He says he survived thanks to the fact that he was a painter.  When Pol Pot wanted a portrait he volunteered to paint it and lucky for him, it was liked and prefered over others.  His wife was killed in the prison.


This was a very hard day to say the least but like I said before, it is important that we all learn about it.
I spent the rest of my time in Phnom Penh seeing other highlights in the city:

Saw a beautiful show of Khmer traditional dances at the National Museum.
After Phnom Penh I took a few days of much needed rest in Koh Rong Samloem.  This is a very quiet, peaceful island off the coast of Sihanoukville where I attempted to nurse my traveller’s fatigue.  See my previous post on this.
After a quick trip back to Bangkok to see some dear friends from home I came back to Cambodia for my Vipassana course.  I took a bus from Bangkok to the border and then another bus to the town of Battambang.  This time I was more than ready for the border crossing and only paid $30 for a visa right at the Cambodian visa office.
I had two days to do some site-seeing:

I visited the Phare Ponleu Selpak, aka. the Cambodian circus.  I had watched their circus show in Siem Reap and was very impressed with their performance.  I went to visit the school where they train in Battambang.  Phare Ponleu Selpak is an organization that helps disadvantaged, abused children and their families through social education and cultural support. They do this by focusing on performing arts, music and theatre. They have 1,000 children currently attending the school. The original idea began in 1986 back on the Thai-Cambodia border refuge camp where Veronique Decrop a teacher from France ran drawing workshops for the children to help them overcome their trauma from the war. In 1994, nine of her students and Veronique extended the idea to other kids in need in the community and founded a non-profit. They later expanded from drawing to the circus, dance, music, and theatre.  In exchange of a $5 donation you can visit the school and see the children in their training. We saw some of the acrobats and jugglers from the circus working hard in the gym.

If you want to learn more about them, or donate, please visit their website at http://www.phareps.org.
Before going into a strict meditation course for 10 days, I decided to pamper myself by eating all of my favorite “western” meals (like pizza and ice cream) and getting a massage.   I went to a placed called the Seeing Hands Massage; which creates employment for members of Cambodia’s blind community.  As you can imagine life for blind people in Cambodia (a very poor country) is a constant struggle. Seeing Hands Massage offers blind masseurs an independent income that helps them have relatively normal lives. It turned out to be a great massage!  I highly recommend this place.