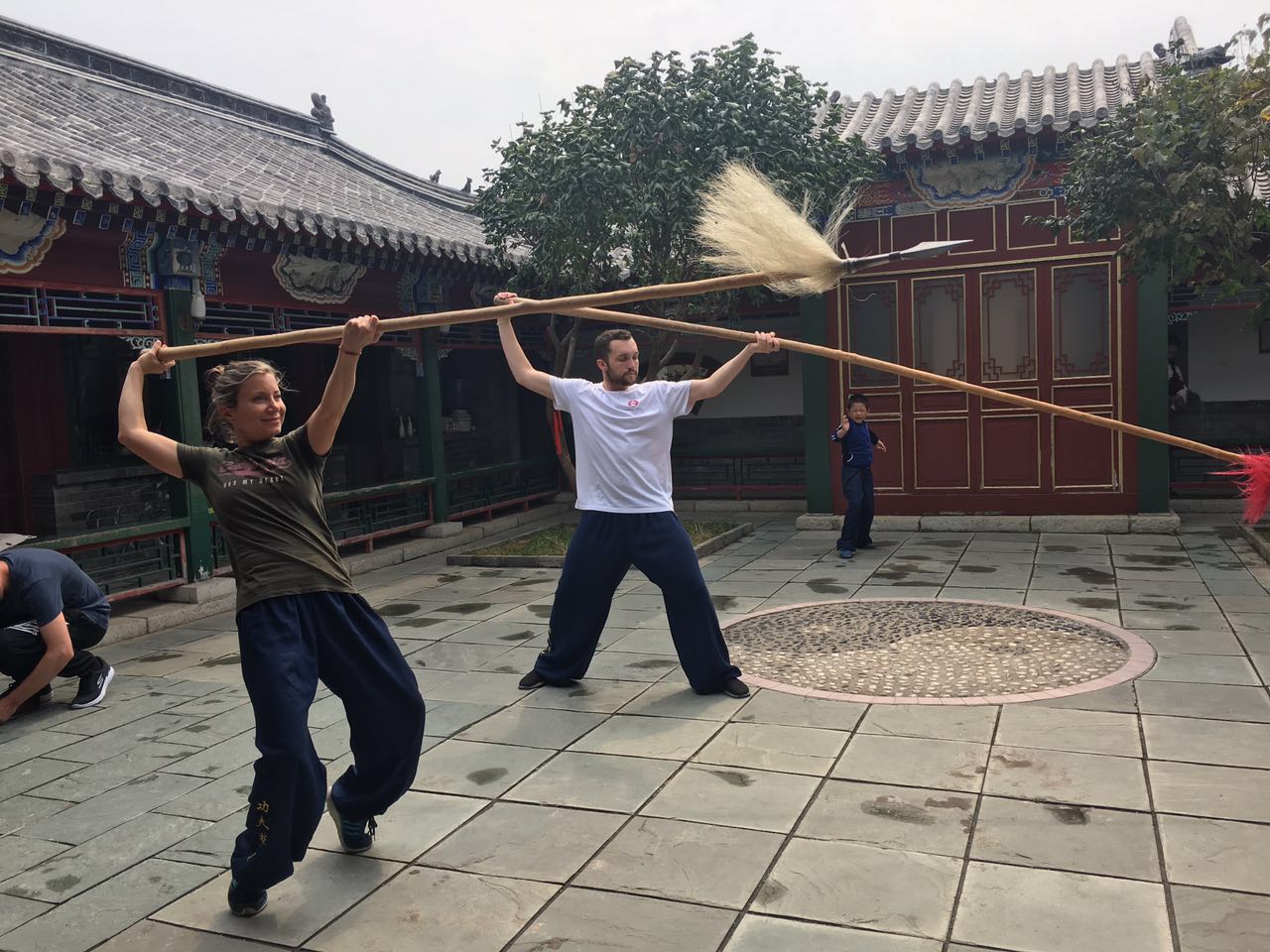 KUNG FU & ZEN, two words that I never thought could go together but now I believe they should never be separated.  I wanted to kill sometime while I waited for my Colombian passport to be done in Beijing.  After spending almost two weeks in Beijing, I’d had enough of the city life and I wanted to get out of town. I searched for a meditation center on line, specifically Zen and came across a tour agency offering a weekend stay at the Kung Fu Zen Garden Retreat where they not only offered Zen meditation but taught Kung Fu. I had just seen the theatrical show The Legend of Kung Fu in Beijing and I was so fascinated by this martial art that I thought…why not try it out for myself?!  I decided to sign up for the weekend retreat. I headed to the Xiantang Cultural Village in Changping, 23 miles north west of Beijing. They had a driver waiting for me outside of the train station and about half an hour later I arrived to a beautiful traditional Chinese Garden house with a big courtyard and a giant symbol of Ying Yang right in the center. Naomi, the retreat Manager came out to greet me. She had this great smile that made me feel welcome right away. I had a feeling we would soon become friends. I ended up being the only new student that weekend.  The other students staying there, Mobijin (aka. Lucas Skywalker) a 9-year old kid and two guys, Brodie from Australia and Laurent from France were off (training) for the weekend.  I ended up getting personalized training on Saturday and Sunday morning. I was very fortunate to be trained by Master XingXi who learned Kung Fu at the source, in the Shaolin mountain temple during ten years. I learned some breathing exercises to balance the Qi and some basic Kung Fu stances. I also learned some combat moves, some kicks and blocking and punching.  Master XingXi made me work pretty hard, I was sweating like never before.  By Sunday morning I was convinced that I had come to the right place. I had never felt so soar yet so healthy and alive at the same time.  I never thought of myself as a sports person, much less capable of doing martial arts. I’ve hiked for most of my adult life but I never do anything that requires much cardio work (unless it is a steep or tough hike). It was nice to get some confidence back in myself and see that even at 41 years of age, I can still be in great shape and feel good about my physical capabilities.
After a long conversation with Naomi about my itinerary and exploring the possibility of staying longer, I decided that keeping my previous plan was not as important as living this new experience (of a lifetime). To stay here for three weeks training with two well known Kung Fu Masters, and make my body and mind better was just too good to pass up! After all, this is what travel is all about, going with the flow and accepting new experiences that come along spontaneously. I was also feeling right at home and did not want to leave.  In a matter of only two days, the people at the retreat made me feel like I was part of the family.

Hard discipline, it was!
We had a strict schedule; which consisted of five hours of training including breathing and Qi regulating exercises, three vegetarian meals, and even time for napping after lunch. The Chinese (at least the ones in this town) take their rest hours very seriously. They believe in taking time to allow the body to digest after every meal, and taking a nap if it feels natural. This is considered a good practice for daily body maintenance and overall health preservation.

What I got from this experience was way more than expected
I learned not only about Kung Fu but Chinese culture in general.  Up until the point of finding the Kung Fu center, I had not found traveling as an independent tourist in China very easy. I was faced with a lot of challenges, due mostly to the language barrier and a lot of cultural customs that I didn’t quite understand. Some of my random encounters with Chinese people were not particularly positive, and so I was ready to leave this country with what I now believe was the wrong impression of Chinese people. Thanks to my three weeks here at the Center and a few good conversations with Naomi I was able to begin to understand the cultural differences. Some of these previous uncomfortable experiences- (people never wanting to help me when I was lost on the streets, taxi after taxi refusing to give me a ride somewhere, or people in general just invading my personal space, shoving, pushing and just being plane rude everywhere)- all of a sudden were seen in a new light. It seems I was taking things a bit too personally. My perception of Chinese had been distorted by my own emotions of frustration (and a bit of loneliness), and also a lack of tolerance towards a completely different culture to mine. These misperceptions became my reality; which made me take a rather defensive attitude in all of my dealings with Chinese people. Naomi helped me understand the meaning behind some of the behavior of people on the streets. In my opinion, it seems everyone lives “fast”, they eat fast, they move fast, they talk fast. The older people are a bit skeptical of strangers, perhaps heavily influenced by their own negative experiences from the Cultural Revolution days. Chinese people seem more reserved, sometimes even shy, and they care a lot about “saving face”. If they don’t know how to help you, they prefer to stay quiet rather than risk giving you erroneous information and looking bad. My staying in this town and in the Kung Fu house allowed me to get up close and personal with true Chinese living. I watched how a group composed of the Masters, a business manager, a cook, an admin assistant, the students, and the boy and his mom had all become one family. On a daily basis they helped each other, they tolerated each other, they took time to learn from each other, and they put a lot of emphasis on not only perfecting their Kung Fu practice but about cultivating their internal health (physical and emotional) together.  Prior to this trip, I was always focused on the future.  Always worrying about things that had not happened yet, and perhaps would never happen.  I failed to fully enjoy each moment in the present; which caused a lot of anxiety, and eventually stress.  Being at the Kung Fu Zen center, surrounded by these amazing people and observing how  they lived their lives- taking things easy, going with the flow, helping each other, tolerating each other, accepting change so easily, practicing every activity mindfully- taught me (or sometimes reminded me) how it is possible to live a better, more meaningful, and healthier life.

One day we went to town to visit a TCM (traditional Chinese Medicine) Doctor. We had an opportunity to get a quick overall examination for free so I took advantage of it. After the Dr. carefully checked my pulse and my tongue she gave me a diagnosis that I was not happy to hear. She said that my liver and my kidneys were very weak and she recommended for me to begin a Chinese herbal treatment right away. A couple of days later she delivered her own mixture of herbs packaged in single 12oz bags. I just had to boil it and drink a bag in the morning and one at night. Unfortunately, within the first 24 hours of my treatment I became very ill with achines all over my body, a fever, headaches and a bloated stomach. After only two days and even trying to lower the daily dose, I got to the point where I no longer wanted to eat because my stomach was unable to digest anything. I looked like I was four months pregnant and I felt miserable. I had to stop training to stay in bed for a couple of days. I finally decided to stop the treatment against the Doctor’s orders.  I wanted to get back to my training, after all, I had signed up to learn Kung Fu and not lay in bed while my body detoxified itself. During my sickness, my Kung Fu family tended to my every need. They all took turns helping me with massages, making me ginger soup, bringing me food to bed, lending me a heating pad for the night, etc.  The Doctor even came to see me twice at no additional cost.  I was very overwhelmed with their great care and unconditional attention.

How do Kung Fu and Zen relate?
From my own understanding, the goal of Kung Fu is to find perfect harmony and balance between the external and the internal. In the internal sense, you learn to connect the heart with the mind, the mind with the Qi and the Qi with the strength. In the external, you learn to connect the movement of the wrists with the feet, the elbows with the knees and the shoulders with the hips.  A sort of “success” is when you reach a natural and almost effortless harmony between the internal and external. Your mind cannot be anywhere else but in that present moment. Your breathing and your movements become synchronized. This perfect synergy turns into powerful, and strong moves. If one piece of the puzzle is missing, Kung Fu cannot happen correctly. This connection can only be learned with a lot of discipline, understanding of your own body and Qi, and many years of practice. I got a small taste of it and it has inspired me to lead a healthier life and to continue my practice of living mindfully and in the present.

The official Kung Fu retreat
After two weeks of training, we were joined by three other students Pol from Luxembourg, Manuel from Mexico, Rob from the UK, and Master Paul Wang and his family. We came together for seven days to practice basic Kung Fu, breathing exercises, Chinese Calligraphy, Chinese Philosophy, and Zen meditation. Everything we did during the retreat was a practice of Zen- learning stances and forms, analyzing and discussing the excerpts of Lao Zi and Confucius, and practicing calligraphy- these all required mindfulness, fully being in that present moment, and matching your breathing to whatever it is that you are doing to obtain good results.

I had an incredible time at the Kung Fu Zen Retreat Garden.  I leave China with a deeper understanding of its culture and people, thanks to the great teachings from Master XingXi, Master Paul Wang, Master Weifeng and Ms. Naomi Lee. I learned a ton during these past three weeks, not only about the beautiful martial art of Kung Fu but also about Health preservation, living a Zen life, the importance of a daily Zen meditation practice, Chinese philosophy, and Calligraphy among other things. I can’t thank them enough for all they’ve done for me. It was a life changing experience that I will never forget. A big thank you to my Kung Fu brothers Pol, Jane, Brodie, Laurent, Rob, Lucas, and Manuel.  I will always cherish our time together.
May you always live in Peace!