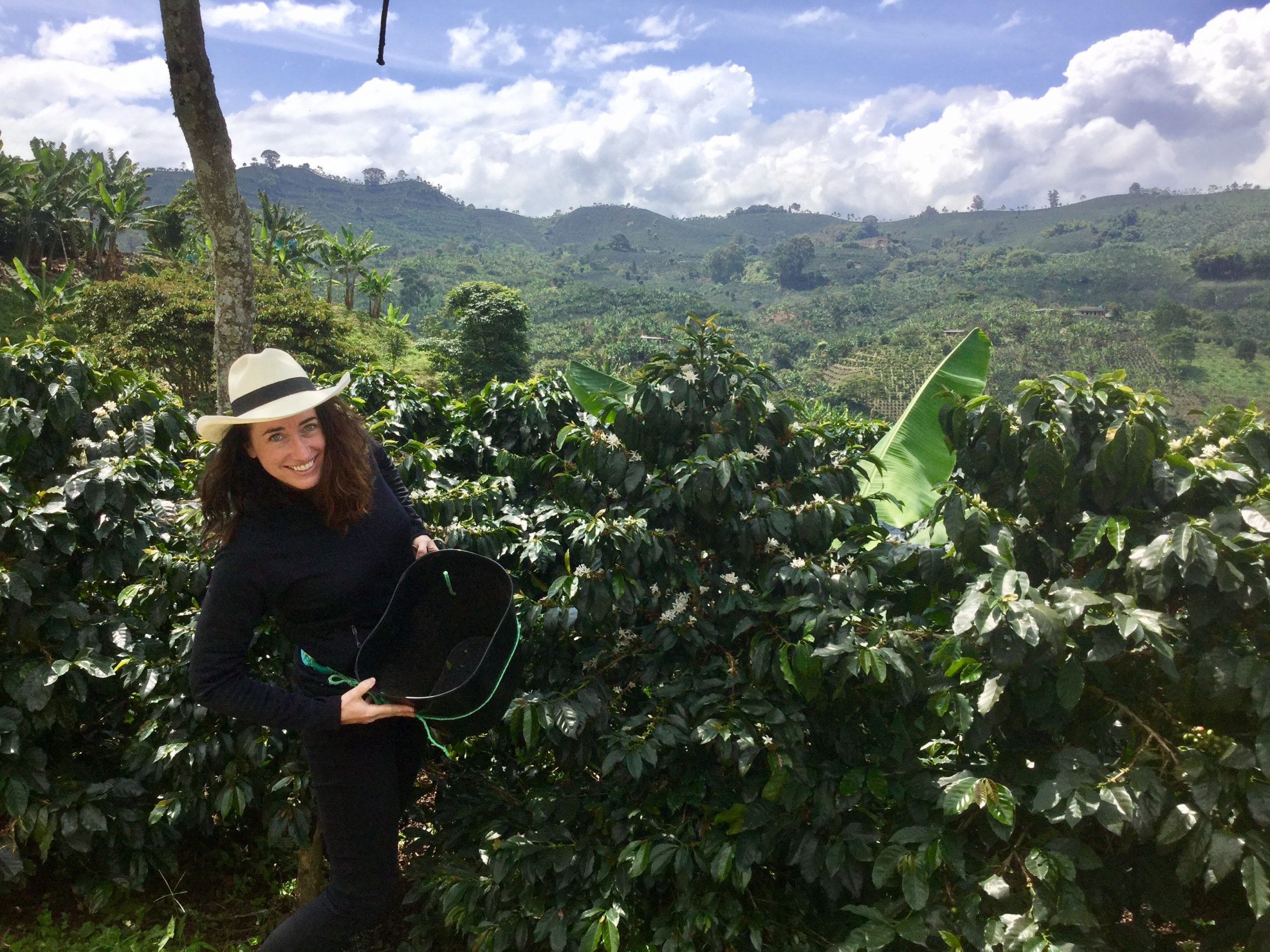 My dear friend Jennifer from Oakland came to see me in Colombia.   We first saw each other in Medellin where I asked her to join me in Jardin, a beautiful and picturesque small town in the mountains of Antioquia where my dad and stepmom live.  Antioquia is part of the Eje Cafetero in Colombia, a region known for producing the most wonderful Arabica coffee in the world.  On Jennifer’s last day we wanted to go see a Finca cafetera (coffee farm) but we had no idea how to go about it.  We asked my stepmom if she knew of any near Jardin that we could visit for a couple of hours before Jennifer had to take her bus back to Medellin.  My stepmom recommended that we go to the Tourism office in town and ask them for recommendations.  They told us about Finca Los Angeles only 40 minutes away from town, where the owners Angela and Andres would be happy to give us a quick tour.  We hired Juan Diego and his moto-ratón (aka. tuk tuk) to take us to the finca.  He offered to wait for us while we did the tour so he could bring us back to town.  The ride up the mountain was incredibly beautiful, on a bumpy road surrounded by coffee plants and plaintain palms.

Don Andres was there alone as his wife Angela had gone to a meeting in town.  He usually offers long tours including lunch but we asked him to do the super quick tour for us since we only had one hour to spare.  He was very accomodating and managed to tell us all about coffee production in the region, show us the coffee plants and other crops, the machines used to process the coffee, and even offer us a tasting of his wonderful coffee.  We couldn’t have asked for a more knowledgeable and courteous host.

We learned a lot from Don Andres… coffee in the area grows all year-round but the main harvest season is October through December.  The mini harvest is from April to May.   January through March is the flowering time when most plants begin to blossom with tiny white flowers.  It takes about nine months for the flowers to produce the coffee fruit.  In the area all the growers pick the coffee manually, only when the fruits are red.  Don Andres only has three permanent workers that watch over the plants and process the coffee but during the big harvest they hire about five “andariegos” or coffee nomads that go from farm to farm across the entire eje cafetero picking coffee.  Harvesting will be at different times in other regions of Colombia so the andariegos always find work year-round.  Some of the bigger farms in the area will hire up to one thousand andariegos.  The coffee plants of different varieties are threatened by many enemies but the biggest ones are the Roya and the Broca.  Roya is a virus that attacks the leaves.  The way to treat it is by planting varieties that are immune to this virus.  Caturro is the variety that gets Roya easily but the cafeteros still plant it due to its great flavor.  The Broca is a small insect that penetrates the fruit and eats the bean inside.  The farmers avoid the Broca by doing what they call the “RERE”; which means recojer repasar, or pick and repeat.  The workers need to pick the coffee fruits before they reach an age beyond thirty days; which is when Broca seems to attack it.  The smaller cafeteros like Don Andres do not use pesticides on their crops; they prefer to do no fumigation at all.

The small producers like Don Andres and Doña Angela sell part of their harvest to a local cooperative that processes the beans for export, another part is processed by a third party that packages the coffee to sell it nationally, and at their farm.  You can usually buy one to two bags of coffee after the tour.  Due to low world coffee prices the smaller farmers also rely on selling plantains, and on tourism to supplement their income.  Don Andres tells me that these days a lot of tourists from France, Germany, and the US are coming to buy coffee for their coffee shops directly from Finca Los Angeles. They know they get a better quality of coffee, organic, and at a better price avoiding the middle man.  He calls this “mercado justo”.  He speaks proudly of his farm and how his family has had it for generations.  He nostalgically explains that his two sons have gone to the city to become “profesionales”, they don’t want to work in the coffee farm.  He explains that the newer generations want to go to the city, get an education and start a career.  He points at a neighbor’s farm in the distance and the houses with coffee parcels that he helped his twelve sons build so they could stay and become farmers like him; “he was a smart man” he says in Spanish.   He also explains how now the younger generations want to come to the mountains and learn all about coffee growing and a simpler way of life.  They want to get closer to nature now, escape the city and come enjoy “el campo”.  His sons have told him that they do not want him to sell the farm as they wish to come back to it in their later years.
After the walking tour around the plantation he takes us to see the machines where he does the pulping; which is removing the skin and the pulpy fruit from the berry leaving only the seed.  He shows us the area where the seeds sit for 20 hours during fermentation, and finally where all the beans are spread out to dry on the roof during five to eight days.

We end the tour with a recap of the process and a tasting.  We are served a fantastic hot cup of tinto, or black coffee.  I have never tasted better coffee!  Unfortunately we couldn’t stay for a second cup as we had to get back to Jardin for Jennifer to make her bus.  We will certainly be back to visit Don Andres and take a longer tour, with lunch included.  He is also planning to build a few small houses on his land so people come and stay the night.  I can’t wait!
If you wish to visit this awesome place, just come to Jardin and catch a moto-raton.  Just tell the driver to take you to Vereda la Casiana where Finca Los Angeles is located.  And for the funnest and most courteous driver, contact Juan Diego at 3128168972.  FYI- they only speak Spanish.  The entire tour with transportation to and from Jardin cost us $60.000 pesos (or US20).  Another way to get to the Los Angeles finca is by catching the Chiva (traditional painted bus from the region) from Jardin in the morning.  For specific times and place you can contact the tourism office in town.

1 thought on “Visiting a Coffee Farm in Jardin, Colombia”