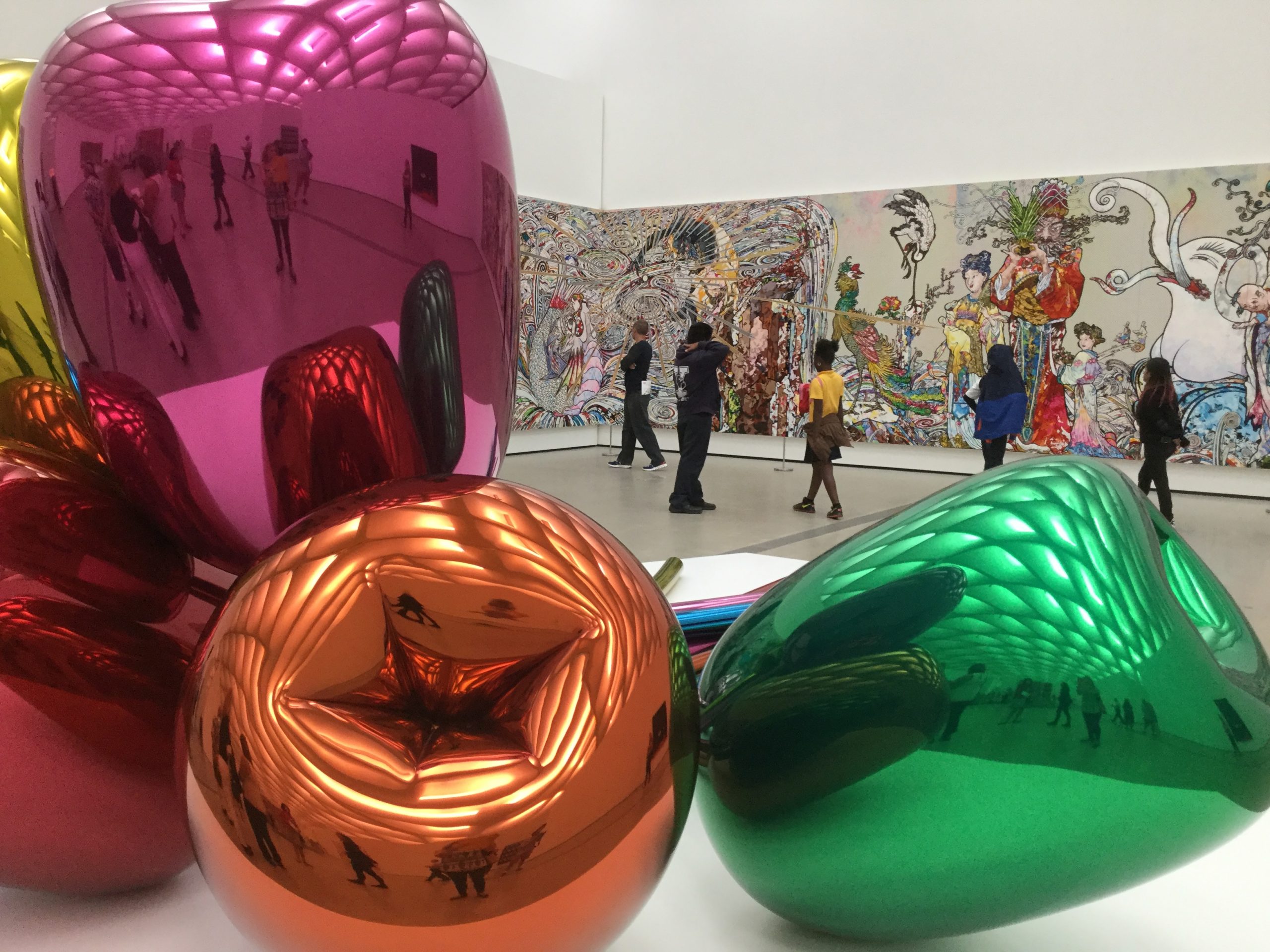 So what do you do when you return home (to Los Angeles specifically) after a two-year trip?  well, besides the obvious like finding a place to live, get a phone, get a car, and get a job… you continue to travel, of course!  Because that is what you have been doing for the past two years and you don’t know any better ;).  But because you can’t go abroad again, just yet… then you travel inside your own city.
So I have decided to continue to write in my blog and tell you about the places that I discover (or re-discover) in Los Angeles, and in the rest of the US.
Just this past week, still without a car, I decided to meet my friend Mark in the downtown area.  Mark traveled with me in Indonesia, Nepal, and India and it was perfect that we decided to meet again and be tourists in our own city.  We met at The Broad Museum; which is a new contemporary art museum located in downtown.   It recently opened in 2015 and it has become quite popular since.  It is recommended that you reserve tickets online in advance to avoid long lines.  You can also stand in line and take your chances to get in like we did.  My friend Mark arrived at 10:00am, an hour before opening time.  I met him at around 10:45am and we were able to get in shortly after 11:00am.  The entrance is free with the exceptions of some exhibits.  That day everything was free.  Once we entered we immediately got in another line to reserve a place for the most popular exhibit, the Infinity Room.  About an hour later (while we saw other exhibits) they texted Mark to tell us that we could get in line to wait our turn to see it.  At that point it only took about 5 more minutes to make it inside.  The exhibit was very impressive.  It was made up of led lights and mirrors inside a black room; which gives you the impression that you are standing in space.  Unfortunately they only give you 45 seconds to admire it alone, or with one other person.  Other exhibits were almost as fascinating as this one.  There were very abstract pieces that I could barely understand, others that I did not understand at all, and some that were very expressive and entertaining.  You can easily visit the entire museum in less than two hours.  For more information on reservations for the museum, visit their page.


So without a car, how do you even get around in this crazy, traffic-intense city of Los Angeles?  There are a few ways… the easiest one is using Uber, but it can get expensive if you are going towards downtown, specially during rush hour.  The other way is by using the metro system; which includes a few metro lines and is linked to the bus system.  Unfortunately this is not fully developed in LA yet and it can take up to two hours to get to your destination, even if it is only 20 miles from where you live, like in my case.  I tried to take the bus/metro combination to make it to the museum.  I left my house and walked for about 15 minutes to get to the bus station for the orange line.  On the orange line I would reach the North Hollywood Station from where I would take the metro Red line to downtown.  When I was almost at the Reseda station (my nearest orange line station), I realized that I had forgotten my ID at home and had to turn around.  After getting my ID I decided that I only had time to take an Uber as I had to meet Mark at 10:00 am and it was already 10:00am.  I did use the metro to get back home from downtown.  The cool thing is that using the buses and metro system in LA is quite easy if you plan your route through their website Metro.net.  I was actually impressed with how organized and clean it was.  It felt safe as well.  I started my journey at the Union Station in downtown (Mark dropped me off there).  The station was really nice and it had a great photography exhibit.
If you prefer to use Uber, just download their app onto your phone and follow the instructions to get a driver.  In the morning, I ended up choosing the Uber pool service; which can take a long time if there are many pick up’s between your place and your destination but it can cost you a lot less than getting your own car.  I ended up spending $25 to get from the Valley area to downtown at 10:00am, right after rush hour ended.  The trip took about 30 minutes.


After the museum we walked around downtown trying to find a park where we could take a walk and have some lunch.  There are actually a few green areas near the museum, the Civic Center Park, Angels Knoll Park and the Pershing Square.  We found our park; which had a few tables and food trucks.  This is typical in LA, to see food trucks in popular areas at lunch time.  I had been craving Mexican food since I had arrived back in LA so we tried the Mexican burritos truck.  It was yummy!
It is easy to walk in the area and there are many other attractions for tourists like art galleries and theaters, including the stunning Disney concert hall.


There is a lot more around in this area but we didn’t have time to see it all.  So this is just the beginning of my “re-discovering LA” tours.  I will continue to post a lot more on this beautiful, diverse, and fun city.   Until next time!