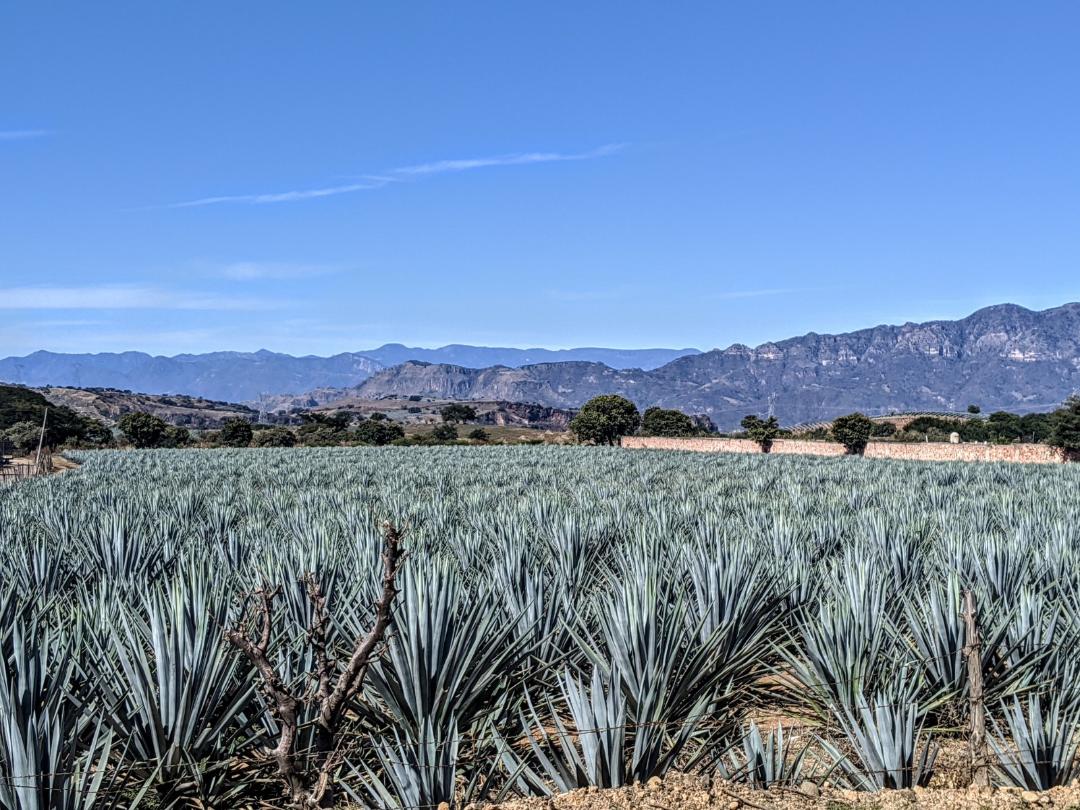 Guadalajara is a beautiful city of 1.5 million people and considered Mexico’s second city in importance. This was my first stop on my one-month trip through central Mexico. I stayed in Guadalajara for four days; which I consider to be a good amount of time to see the main sites and get a feel for the city and its surroundings BUT… if you have more time, I recommend staying longer. There is so much to explore!

At first Guadalajara felt like a big “pueblo” as I walked around the streets of the historic center of the city. It wasn’t until I wondered outside of the center to head to the municipality of Zapopan that I discovered that Guadalajara is actually quite large and very modern, full of beautiful buildings and big avenues. Guadalajara is the capital and largest city of the State of Jalisco, known for its important cultural traditions which represent the “soul” of Mexico- Tequila, Mariachis, and Charreria. I dedicated my time in the city to learning more about these.

Before diving into the traditions, first I needed to get my bearings, get a sense of the city and its surrounding municipalities. To do this I took a city tour from Tapatio Tours, recommended by my airbnb hosts. The tour departed from the “Rotonda de los Jaliscienses” and only cost MXN$140 (US$7.50). Tapatio’s sales booth is located on the NW corner of the Rotonda on Calle Independencia. The tour price is further discounted if you buy it in a bundle with a tour of the Tequila Route; which I did.

Tour of Guadalajara and adjacent municipalities:

The tour is open to the public and it’s done in a double-decker red bus. The top deck has no side windows so you have no obstructions to take great photos and feel the wind. They play recorded commentaries in Spanish on the speakers as you approach each site. On the lower deck you can enjoy an audio guide in English with earphones (only by request). The tours leave every hour until 8pm but it is recommended to take the one at 9:40am in order to have time to visit all the places covered- the “municipios” of Tonala, Tlaquepaque, Zapopan and the historic center of Guadalajara.

The tour makes for a long 10 or even 12-hour day if you get off to walk around the different towns and explore some of the most important sites; which you definitely should! At each of the municipios you will be dropped at or near the main square in the historic center. This is where you can learn and feel the town’s culture the most. You will always find a beautiful Cathedral (or Basilica in the case of Zapopan) reigning over the square. The main square is where all of the action takes place and where you can sample the wonderful local food from the street vendors or the many restaurants around, the local crafts from the mercados and enjoy the many art galleries, cafes, and museums. Tlaquepaque and Tonala are known for the traditional “alfareria” or pottery. You can find “talleres” or pottery shops to see the local artists in action and buy beautiful souvenirs. All of these places are colorful, friendly, and safe to walk at any time of the day. You can always find a street party in the squares where Mariachis (traditional Mexican folklore music groups) always fill the atmosphere with their beautiful songs. I recommend eating at the taco stands which are found EVERYWHERE. The cooks are usually grilling or frying a variety of meats; which you can choose to put on a taco, quesadilla, gordita, burrito, or any other tortilla variation on offer. This is the cheapest and funnest way to eat (+/- US$4 for a meal) and a great way to experience the culture and interact with local people.

I took a trip with a fun group of Mexicans, again with Tapatio Tours, to do “La Ruta del Tequila” or the Tequila route. This is an all day trip to visit the three towns that make up the route- El Arenal, Amatitán, and Tequila (yes there is a town with such a name!). We visited two tequila houses, the first one was Tequila Don Valente in El Arenal- a small family owned house with an “artesanal” production (vs. industrial), in other words still following very traditional ways to harvest, distill and age tequila. As an example to differentiate the artesanal from the industrial, the artesanal will produce about 10,000 bottles in one month where as the industrial can make that same quantity in one day. The family’s oldest son was there to greet us and teach us all about tequila making. We learned the proper way to taste a tequila- you put the entire content of the shot glass in your mouth, then you swish it around for three seconds, take a breath, swallow, and exhale swiftly. They told us that if you feel any burning in your throat or mouth then you have not followed the steps correctly. If you do it properly you should only feel the flavor of the tequila in your mouth afterwards. We also learned that there are two types of tequila, the first is 100% made from Agave Weber Blue, aka. blue agave. This is what you should get if you just order a shot of tequila. The other type has 60% of the Weber Blue Agave and 40% of a mix of other agave types. This one is mostly used to make cocktails. The alcohol content allowed by the government in a Tequila bottle is a max of 60%, usually tequila bottles will have around 40% though. Tequila is part of the Mezcal family and in order for a bottle to be labeled as “Tequila” it has to come from the town of Tequila or one of the states that are part of the “Tequila Origin Denomination” or DOT; which are Jalisco, Guanajuanto, Michoacan, Tamaulipas, and Nayarit. Any other mezcal drink from anywhere else in Mexico will be labeled as “Mezcal”. There are five types of Tequilas- Blanco (Silver) not aged and the purest form of the distilled agave; Joven (Gold) aged up to three months; Reposado (Aged) aged from 3 to 11 months; Añejo (extra aged) aged from 1 to 3 years; and Extra Añejo (Ultra-Aged) aged 3 years and beyond. At Don Valente they had an Extra Aged of 9 years that you could taste for a fee of MXN$200 (USD$11). We had a lot of fun tasting the tequila as the guides would recite the tequila “oraciones” or prayers; which gave romantic, religious and sexual references all in one. They were funny and always rhymed.

After the first tastings of the day, we headed to Amatitan to visit the Tequila Selecto, a family owned industrial production house. We had a quick tour of the distilleries and the aging room full of oak barrels. We then moved on to the cantina area where we proceeded to taste many tequilas and listen to our guides do more prayers. We tasted a total of 21 different types of liquor including Tequila and flavored tequila liquors. They make some interesting creations here with coffee, nuts and fruits. By the time it was all done, everyone was feeling really happy, as you can imagine! We had lunch at a traditional Mexican food restaurant and then headed to Tequila where we were given two hours to explore the beautiful and colorful colonial town center. The tasting tour and the town of Tequila were absolutely incredible!

I have never been to a rodeo in the US but if I was going to come to Guadalajara I would not leave without seeing a “Charreria” or “Charreada”, the Mexican words for rodeo. I heard from our Tapatio Tours guide that there was a Charreria in Guadalajara every Sunday so I asked him how I could join the event and he was nice enough to get me free tickets from his company. Luckily two of my tequila tasting buddies that I had met on the tour- Yolanda and her grandson from Tabasco were huge Charreria fans and decided to join me. They kept me well informed throughout the 2.5 hour event.

We met at the Lienzo Charro Jalisco, one of 21 rodeo arenas in the state of Jalisco. It was great to be part of such an old and lively Mexican tradition. We got to see a competition between two teams made up of “charros” or cowboys as they demonstrated their amazing skills in handling horses, bulls and calves while they performed in the “Suertes” or different categories. In Spanish suerte means luck and they are called this way because the charro is considered lucky if they survive each suerte without getting harmed. I call them skilled! The nine suertes are: Cala de caballo, Piales en el lienzo, Coleadero, Jineteo de toro, Terna en el ruedo, Jineteo de yegua, Manganas a pie, Manganas a caballo, El paso de la muerte. If you want to know what each one is all about, here is a great article which explains each one: Suertes de la charreria (page is in Spanish but you can have it translated by Google ;)).

I am happy to report that no animals or people were harmed during the day’s festivities. The ambiance inside the arena was very fun and suitable for families. There are vendors selling all types of Mexican snacks like popcorn, potato chips with salt and lime, chicharrones (pork skin), beer, and tequila of course! There was also a Mariachi singer walking around singing traditional Charreria and romantic Mariachi songs to the audience. It was a really great authentic Mexican experience.

And at last, GUADALAJARA! A beautiful and large city that has a ton of things to offer. I spent a lot of time walking the the historic center where I stayed and visiting the main sites like the Mercado Libertad San Juan de Dios- the biggest local traditional market in the city offering tons of Mexican food restaurants/stalls and crafts; MUSA- Museum of the Arts University of Guadalajara where they had a very impressive exhibit on three famous Mexican artists: Siqueros, Diego Rivera and Orozco; the Cathedral of the Assumption of Our Lady- a minor Basilica built in the Spanish renaissance style with Gothic spires; and the Templo Expiatorio- another beautiful church built in the neo-Gothic style that took 75 years to be completed.

For a Mariachi show with great Mexican food go to Restaurant Epoca de Oro or Casa Bariachi both located in Guadalajara historic center or go to the famous El Parian Restaurante in Tlaquepaque.

I found a great article on Guadalajara that explains the different neighborhoods; which can help you decide where to stay: http://www.playasyplazas.com/mexico/things-to-do-in-guadalajara-jalisco/

The city has its own hymn, a song written by Pepe Guizar in 1937, you will hear it more than once while in town or in one of your tours. Here are the lyrics to this a beautiful poetic song (play it on Spotify, you will love it!):