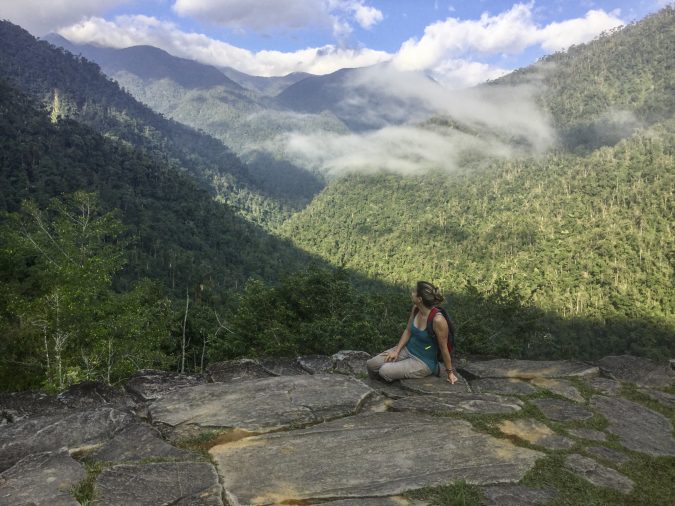 One of the best treks I have done during my travels is the one to the Lost City or “Ciudad Perdida” in the Sierra Nevada Mountains of Santa Marta, Colombia.

The Lost City, or “Teyuna” as it’s known by the indigenous people of the region, was one of the many settlements of the Tairona, the people that inhabited the Sierra Nevadas when the Spanish colonizers arrived.

This city that once flourished in higher altitudes was eventually reclaimed by the jungle after being abandoned by the persecuted Tairona during the Spanish conquest. It was rediscovered hundreds of years later by tomb raiders looking for gold in 1972.

The Ciudad Perdida is the most popular city of the Taironas, but there were many others in the area, like the coastal city known as “Pueblito”. And there are many more still buried deep in the jungle that archeologists have yet to uncover.

What makes this place so alluring is the fact that the only way to reach it is by doing a multi-day trek through the dense jungle mountains.

To visit the Ciudad Perdida you have to go on a guided tour with one of the five tour operators that are allowed to enter the park.  They all charge the same price whether you decide to do the 4-day, 5-day, or 6-day trek. To get an idea of the 4-day trek itinerary, check out Expotour’s page.

The price includes the English-speaking guide, accommodations, and all meals.  Although the trek is very popular and the trails can get crowded, I still found plenty of time to hike on my own.  It is possible to enjoy this stunning jungle paradise all by yourself if you just stay at the back of the group and slow down your speed to fall behind the others by a few minutes.

The trek is a twenty-three kilometer path marking the distance between the starting point known as “El Mamey” and the Lost City ruins.

It offers excellent views of the lush jungles, and snow-capped mountains. Quick fact: The highest peak in Colombia is located inside the Sierra Nevadas and it’s named Pico Cristobal Colon reaching an altitude of 18,950ft (5,776m).

What makes this trek really awesome besides the amazing views, is the clear emerald green pools that you often find along the trek where you can go for a swim and take a break from the intense heat and high humidity.

There are also plenty of opportunities to see, or meet if you are lucky, the indigenous people of the area. On the trek you will pass members of the Kogi tribe; which is the most prominent one in this part of the park.  The Kogi are the only group that still keep their traditional customs. They wear white long dresses and seem very quiet and reserved but most are able to communicate in Spanish.

The other tribal groups living in the Sierra Nevadas are the Arhuaco (or Ika), Wiwa, and Cancuamo. All four groups are believed to be direct descendants of the Tayronas.

The first night the guide will give the group a lecture on the history of the region, the Kogis’ cultural norms, and the importance of the coca leaf to the tribes.

The Kogis believe their main responsibility is to maintain the balance with the universe.  They use a lot of rituals, offerings, and meditation to achieve this goal.  The coca leaves are used on a daily basis, all men carry a mochila (handmade bag) that they fill up with these and will offer when greeting another man as a sign of respect.  The men chew them to get stimulated. They carry an instrument called Poporo also used by other pre-Columbian indigenous groups where they carry lime or calcium.

The Poporo is filled with pulverized calcium that they get from conchs from the sea.  They use a stick to dip into the powder which they mix with the wad of chewed leaves inside their mouths.  The alkaline content in the powder reacts with the coca leaves; stimulating the ingredients that give the high effect.  As they pull the stick out of the mouth they rub it on the Poporo, leaving a residue on it that hardens and accumulates overtime creating a hard base.

The Poporo is given by the “Mamo” or tribe king to young boys during a four-day “coming of age” ceremony.  After the boys complete the ceremony ritual they are trained by an older person on how to have sex with a woman before they choose to get married to a partner chosen by their parents.

As the men get high they record all their spiritual knowledge, dreams, and thoughts on the Poporo.

The trek is not easy and it has many steep climbs and various river crossings. I would highly recommend doing it during the dry season from December to March to avoid high river flows and muddy trails.

The good news is that you only have to carry your personal pack with things like water, snacks, camera, and a couple of changes of clothes with you. The food is carried by mules.

Each day after a few hours of trekking you arrive to a campsite along the trail that is fully equipped with beds, blankets, hammocks and everything you need to spend the night comfortably. The accommodations are quite basic and you can definitely expect to have mosquitos and other bugs around.

The morning of the last day we climbed 1,200 stone steps through the jungle to reach our awaited destination.

The arrival to La Ciudad Perdida was absolutely fantastic! We went ahead of the other groups by approximately two hours and had the ruins all to ourselves. The city is made up of 169 terraces that are carved into the side of the mountain and various circular plazas.

It is a very beautiful and calm place with a special energy. It is easy to spend a few hours here just admiring the beauty of the mountains and jungle around you.

Thanks to my guide’s connections, I had the chance to meet the main archeologist Santiago Giraldo and the Kogis’ Mamo (King of the tribe) who happened to be there on the same day as us.

Mr. Giraldo explained that once a year he and his wife bring middle school students from the top tier in society (aka. future politicians and business men/women of Colombia) to teach them to care for the environment, the indigenous cultures, and nature conservation.

The trek to La Ciudad Perdida was definitely one of the best multi-day hiking trips that I have done in my life. I highly recommend it to anyone who loves a good jungle adventure and learning about ancient cultures and stunning archeological places.